1. IN A WAY OF INTRODUCTION

Autumn ceases with a hiss
December lies down
and spreads her snow.
I have no emptiness
where I can burrow in my hurt,
no hands to hold me
except my own
stumps,
suffocating trees
in which the ravens dance the bloody dusk;
it is the season to unmask
my words
to freeze like sparrows
inside this air
and fall
until the spring redeems.


2. SOME DETAILS ABOUT THE BABY, NOT FOUND IN BROTHERS GRIMM


3. THE IMPORTANCE OF LEAVING THE LIMINAL SPACES WELL ALONE

Palli met Old Death at crossroads.
"Will you be my son's godfather?"
YES  - He took the old man home -
I WILL LET HIM SEE MY CANDLES
Palli's wife yelled from her childbed,
"You have let this Old Man –"
so she whispered from her
"Death –" bed
" 'cross the threshold,
in? " The widowed Palli named
his son
Daniel

In my father's hands, the candles drip
onto the black candelabrum of fingers - he knows
these men's fates. Rampant, but with each scalding
drop,  a day is gone - or two, or a whole year,
and where do they go
when their days droop, finally spent,
useless
leftover tallow?

The world is a walking graveyard of candles
Men in their pre-funereal clothes
Burning head-first
quietly, or sputtering. Would
it be worse if the world was completely extinguished?
Daniel, blinking, in his white coat, stands
at the foot of another hospital bed; his Godfather whispers
THIS ONE HAS A WHILE YET TO BURN
but speechless, without movement ,
without coherent thought, without memory, silently wailing
A WHILE YET
Daniel swallows. "You and your collection."
The relatives don't understand.
Doctor, please, please, is there hope yet? They clutch
At his hands, carry home
A thin film of wax on the tips on their fingers. "Hope?
We do not deal in hope here. For hope,
dial 1.800.SUICIDE
HopeLine."

He sees
his own candle
a while yet to burn

Will I defy you in my heart?
Will I defy you with a beautiful woman?
Will I defy you with an ugly offspring of a she-goat
upon a mountaintop
or in one of those faceless corridors, smeared
with snot of a thousand grieving sons?
How does one lose such a parent as you?
I defy you with water, with fire, with ash
of forbidden books, of men extinguished all at once
in a mighty gust of wind, I defy you
in song, in silence, in my underwear, naked –
My condolences, Father,
there is no place to run from you.


7. IN DEFENSE OF THE MORNING DEW

he stumbles, disoriented
to the hospital courtyard. Blinks
as the grass, unencumbered by family matters,
parts for the smallest crumb of the earth,
for the beetle, the worm, the candy bar wrapping -
the underfoot denizens,
all the forgotten, insisting, persisting
despite the light
or maybe because of it -
"Doctor!
Emergency call to room 316!"
Shoulders hunched, Daniel tramples
his cigarette in the grass, takes
a thin breath. The air
blossoms with spring ocean winds

Whose candle are you, sun,
That never snuffed, you die each night,
That never lit, you are remade?
Whom do you guard from jealous eyes
behind your shining?
Who will cease
when you go out?
I think I know. 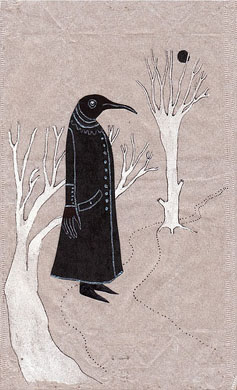