I remember your teeth at my throat, love,
As you held me close deep in the night,
With my blood pumping through your cold heart, love,
As you wooed me with bite after bite.

Every touch opened magical realms, love,
Each caress fought against the mundane,
So I drowned in the blood in your eyes, love,
And I vowed not to surface again.

I remember the way that I felt, love,
As though you were my final reprieve.
And I pleaded, and begged you to stay, love,
But you laughed as you stood up to leave.

Then you said it was just for one night, love,
That I was just one more cheap meal,
And you dropped some loose change by my bed, love,
Like a businessman closing a deal. 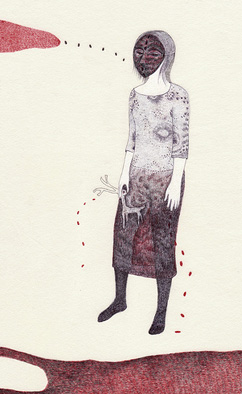 Marcie Lynn Tentchoff is an Aurora Award winning poet/writer from the west coast of Canada, where she lives in the middle of a rain forest with her family and various animals, both invited and not. Between the raccoons in the roof, the deer in the garden, the chocolate-stealing skunks, and the occasional visiting cougar, she's written poems and stories that have appeared in such magazines as On Spec, Weird Tales, Dreams and Nightmares, and Illumen, as well as a fantasy poetry collection called Through the Window: A Journey to the Borderlands of Faerie, which is illustrated by Michelle J. A. McIntyre, and available through Amazon.

When asked under which fantasy world / government she would most like to live, Marcie replied, "Most fantasy worlds have a such a variety of governments, with even wider spreads of quality of life within each, that choosing one is difficult. In my (ill-spent) youth I would have immediately chosen Marion Zimmer Bradley's Darkover, simply because I liked the idea of a compact against the use of long range weaponry, but even that is a strongly spilt society of haves versus have nots. When it comes right down to it, fantasy worlds seem like great places to vacation (a tasteful chalet on the side of Mount Doom, a furnished suite in the Vulgar Unicorn, a bedroll near Molly Grue's in the forest near King Haggard's castle) but not the best places to live. If forced to chose only one, though, to actually spend large amounts of time in, I'd probably most prefer to live in one of Lloyd Alexander's Free Commots, with no lord or king to rule over me."

Back to Table of Contents